HEMINGWAY: THE GOD THAT FAILED 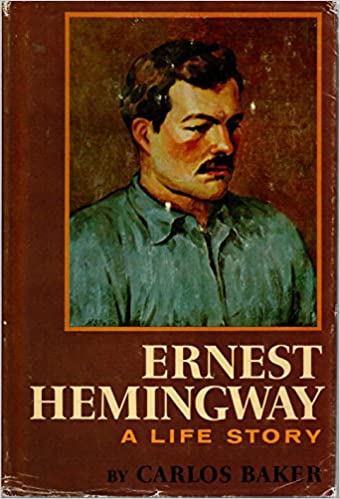 “Yeah, you’re a legend in your own mind.”

Ernest Hemingway was a legend in his own time…and, it turns out, in his own mind—a fact well-documented in the recent Ken Burns documentary exploring the gap between the man and the self-created myth. As a teenager growing up in the late fifties and early sixties, I knew nothing of the man behind the mask. I knew only the myth.

Impoverished writer living above a sawmill in Paris. War hero and later, war correspondent. World traveler and adventurer. Aficianado of the bullfight in Spain. Big game hunter in Africa. Sportfisherman in Cuba and Key West. And without doubt, the world’s greatest writer.

A man as big as the books he wrote.

I was introduced to him by Mrs. Nancy Hobbs, my English teacher in my junior year at Ganesha High School in Pomona, California. She recommended that I read A Farewell To Arms as the subject of one of our required book reports, telling me that Hemingway was quite possibly America’s greatest living writer.

So she was ignoring Steinbeck and Faulkner. So what? She could have recommended Grace Metallious of Peyton Place fame, and I’d have eagerly accepted her judgement. (Actually, the Metallious book, key passages of which I had read on my own initiative and shared with friends, had considerable appeal for this hormone crazed teen.)

As I said, Mrs. Hobbes could have recommended anyone, and I’d have rushed out to read their work. Why? Well, Mrs. Hobbs was not only a gifted teacher and a highly knowledgeable literary scholar with degrees from Pomona College and the Claremont Graduate School, she was also…how shall I say this? She was hot!

I had a major crush on her, and it turned out that I’d develop a different kind of crush on Ernest Hemingway. I loved A Farewell To Arms. All that sex and violence! And the forbidden language! I loved it so much I even read a book about its author. Hemingway: The Writer as Artist by Carlos Baker.

I quick ditched my plans to study engineering at Harvey Mudd. No, I was going to Pomona College to study literature and possibly, somewhere way in the back of my mind, the Pomona coeds—all of whom I was certain would be younger versions of Mrs. Hobbs. It turned out that they weren’t, but my passion for Hemingway and for American literature persisted.

This led me to graduate studies at Princeton, where one of the faculty members was…Carlos Baker. Yes, the Carlos Baker, who would become my thesis advisor and who just happened to be writing the authorized biography of Ernest Hemingway. Hemingway himself had rudely decided to commit suicide before I could meet him, but Carlos was the next best thing.

You can imagine the thrill when he decided to offer a seminar in Hemingway biography and accepted me as one of the five lucky participants. The first thing he did was pull out a stack of the scrapbooks Grace Hemingway kept of her son as he grew up. Carlos gave each of us a scrapbook and assigned us the task of writing a chapter of the biography based upon the scrapbook we received.

I was excited beyond belief…and also terrified. The damned things were worth something like $12,000 apiece even back in those days so long, long ago. I was convinced someone would steal mine, and I’d be held responsible. I told no one I had it, and I spent days studying the photos, the notes, even the occasional locks of hair that documented his early life in Oak Park, Illinois, and those summers up in Michigan.

I finished the assignment feeling that I had grown up alongside the great man, that I had known him intimately.

The next assignment was a chapter based upon a sheaf of letters to and from Hemingway during those early days in Paris, an assignment that changed everything for me. It was a letter to one Ernest Walsh that did it.

Walsh was the editor of one of those little magazines that flourished in the Paris of the day. He was the first (or among the first) to publish a piece by Hemingway. He was also dying of tuberculosis, and he knew it. Hemingway knew it too. And so after Walsh published his work, Hemingway wrote him a letter that began, “Dear Ernest—Isn’t life wonderful. I want to live to be a hundred, don’t you?”

I was stunned by the cruelty, but I soon discovered that this was a pattern in Hemingway’s behavior. Once a friend helped him, Ernest would go out of his way to destroy that individual, to show the world that he—hard-boiled, hairy-chested Ernest Hemingway—had made it on his own and that his own work was vastly superior to that of his mentors. He did it with Sherwood Anderson, Gertrude Stein, and many, many others, including Scott Fitzgerald, who wisely advised him to cut the first fifty or sixty pages of The Sun Also Rises, who talked him and his work up with everyone he knew, who got Hemingway the great Max Perkins as his editor and the prestigious Charles Scribner’s Sons as his publisher.

The first major assault on Fitzgerald came in one of Hemingway’s greatest stories, “The Snows of Kilimanjaro.” It was in the version published in Scribner’s Magazine, the journal of Fitzgerald’s publisher. The writer dying of his own carelessness—gangrene from an untreated injury—remembers “poor Scott Fitzgerald.” “How he had started a story once that began, ‘The rich are very different from you and me.’ And how someone had said to Scott, ‘Yes, they have more money.’ But that was not humorous to Scott. He thought they were a special glamorous race and when he found out they weren’t it wrecked him just as much any other thing that wrecked him.”

But not as shocking as the fact that the attacks continued even long after Fitzgerald’s death. In his beautifully written but mendacious memoir, A Moveable Feast, Hemingway included a chapter called “A Matter of Measurements.” In it, Scott Fitzgerald comes to Hemingway in a bar and tells him that Zelda said, “The way I was built I could never make any woman happy. Hemingway responds by asking him to come with him to the bathroom and drop his pants. He complies, and Hemingway tells him, “There’s nothing wrong with you. You look at yourself from above and you look foreshortened. Go over to the Louvre and look at the people in the statues and then go home and look at yourself in the mirror in profile.”

I’m convinced the entire episode is fictional. After all, he has Scott Fitzgerald talking like a Hemingway character: “I wanted you to tell me truly.” But even if it were dead-on in factual accuracy, there’s simply no excuse for him writing this humiliating story about one of his closest, most generous friends.

That—and other ugly secrets hidden in the letters—did it for me. I left Princeton still admiring Hemingway’s writing but despising him as a man. In fact, when I was teaching his work in my American literature class, I began with a lecture I entitled “Hemingway as Bastard.”

There are lessons to be learned here. I suppose one of them is this: Never let your lust for a high school teacher determine your literary taste. The more important, the more universal lesson? Never confuse the artist and his or her art. The two are entirely separate, often antithetical. Witness Knut Hamsun, the Nazi sympathizer who deservedly won the Nobel Prize for literature.