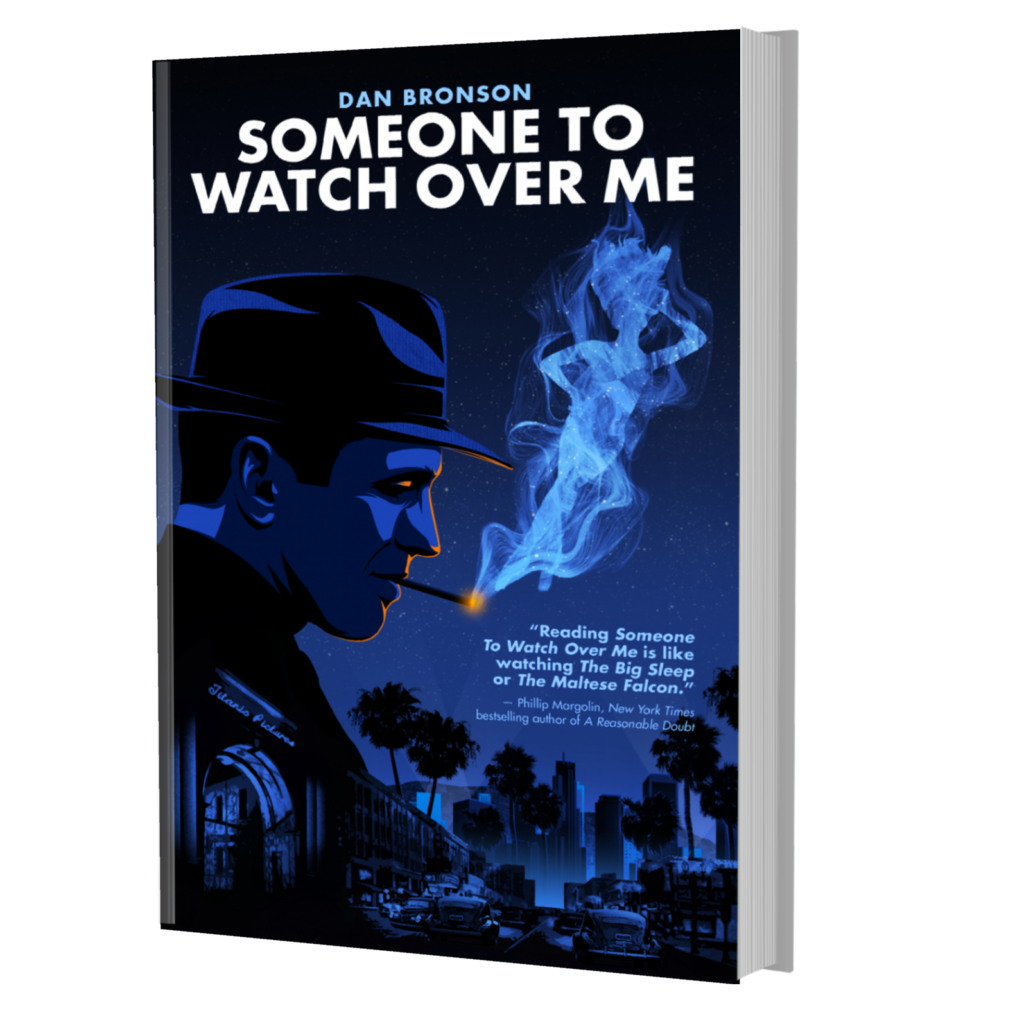 Someone To Watch Over Me

Hollywood, 1947. Jack Shannon, a former actor whose promising career was interrupted by the war and ended by a facial scar sustained in combat, is now a studio publicist. He jokes that the only thing he knows about publicity is how to suppress it, but that, in fact, is his real job. He’s a fixer who babysits the studio’s stars and covers up their bad behavior.

Everything changes for Jack when Savannah Stevens enters his life. A sexpot star in the mold of Jean Harlow and the studio’s biggest box-office draw, she’s a deeply troubled young woman given to emotional breakdowns, unexplained absences from the set, and time-devouring delays occasioned by her paralyzing insecurities and her insistence on dozens of takes.

Jack’s job is to stay with her 24/7, deliver her to the set on time each day, and make sure she completes her current picture, a picture on which the future of the studio depends. All goes well until Savannah disappears, and Jack is assigned the task of finding her…without revealing to anyone, including the police, that she is missing.

Read an excerpt
Buy the book

“A perfect film noir filled with scoundrels, scandals and skullduggery against the backdrop of the land of make-believe. Someone To Watch Over Me travels the boulevard of broken dreams with plenty of wit, vigor and shocking surprises, delivering one of the best reads I’ve had in a long time.”–Ray Schillaci, The Movie Guys

“Jack Shannon recalls Raymond Chandler’s description of Phillip Marlowe: ‘Down these mean streets a man must go who is not himself mean, who is neither tarnished nor afraid.’ Streets don’t come any meaner than those of 1947 Hollywood, where corruption is systemic, where no one is who he or she seems to be, where life is a series of traps, and no man is better prepared to navigate those streets than Shannon, whose voice is as distinctive as Marlowe’s.”—Stephen Galloway, former Executive Editor of The Hollywood Reporter, current Dean of Chapman University’s Dodge College of Film and Media Arts, author of Leading Lady: Sherry Lansing and the Making of a Hollywood Groundbreaker

“A riveting film noir, Someone is chock-full of mysterious shadows, tragic circumstances, and foreboding imagery. In fact, if you listen closely, you may even hear the haunting notes of a sexy jazz saxophone running through the backstory.”–Anne Goetz, author of The Ashkettle Boys

“Reading Someone To Watch Over Me is like watching a classic 1940s black and white noir detective movie like The Big Sleep or The Maltese Falcon. There are murders, kidnappings, payoffs, mobsters and coverups in this gritty, inside look at the sleazy side of the post-World War Two motion picture industry. Too bad Humphrey Bogart and Robert Mitchum won’t be available if they make a movie out of this excellent tough guy detective novel.—Phillip Margolin, New York Times bestselling author of A Reasonable Doubt

“There was Sam Spade, Lew Archer, Travis McGee. Now there is Jack Shannon, intelligent, tough, unafraid, uniquely real, and all too humanly fallible. But Jack Shannon’s beat is completely unlike any you have ever read, and it provides a glimpse into the dark and ugly side of Hollywood’s glamorous Golden Age. This is noir at its best.”—Jameson Parker, recovering actor (Simon and Simon), working writer (Dancing with the Dead)

“If Raymond Chandler had turned a steely eye to the notorious Hollywood casting couch, the result might well be called Someone To Watch Over Me. Dan Bronson gloriously re-animates the tones and textures of the noir novel in its classic era, while zeroing the thematic crosshairs onto subject matter directly relevant to the present day. From the dark allure of Tinseltown to the yacht slips of Catalina Island, and featuring a jaded-yet-resilient lead who knows more than he should about people with both secrets and power, this novel roars along like a Rocket 88, pinning the reader to the seat and never letting off the accelerator. It’s a pulse-pounding, pitch-perfect ride in one of the great genres of American literature, and Dan Bronson drives like a master of the form.”—Malcolm Brooks, author of Painted Horses and Cloudmaker

“A film noir reeling off not on the screen but on the page. The writing is first-rate, full of movie-savvy observation and more than a few dollops of laugh-out-loud humor. A joy to read.”—Douglas Soesbe, screenwriter (Robin Williams’ Boulevard), former Story Editor at Tri-Star and Universal

“I cut my teeth on Dashiell Hammett and John D. MacDonald. Unfortunately, I had read all those works before I was thirty and have been enduring a long dry spell. The drought is over. Someone To Watch Over Me is an inside look at how the ‘dream factory’ of the forties produced some blockbuster nightmares, and reminds the reader that noir is much more than gobo shadows dancing on a wall.”—Gerald McRaney, actor (Major Dad)

“Impressively original, solidly written, Someone To Watch Over Me is simply riveting. An absorbing read from cover to cover with many an unexpected plot twist and turn.”–Midwest Book Review

Six-two. Built like a heavyweight. A dandy scar across my cheek. And what do I do?

One studio, actually. Titanic Pictures. Big. Unsinkable. Like the ship.

They call the spoiled children I look after “stars.” You know. “Up above the world so high.” They got that part right. Some of them put a lot of effort into getting high and staying there.

“Like a diamond in the sky.” That’s how they see themselves, and that’s certainly the way the studio bigwigs see them. Diamonds. Gems. Assets.

Money in the bank.

The problem is that at the end of the business day, these assets walk right out of the vault and put themselves at risk. Risk of exposure as brawlers, drunkards, whoremongers, and worse. That’s where I come in.

My job is to protect them from themselves. Think of it this way.

You walk onto a studio lot…if you’re lucky enough to get past the guard at the gate, and you see row after row of identical buildings—big, maybe not as big as blimp hangars but almost, with high white walls and rainbow roofs. You spot an elephant door cracked partway open on one of them, sneak inside, and find a construction crew putting the finishing touches on a set that outshines the Taj Mahal.

And in the middle…a pair of massive wooden doors carved with the inviting figures of unicorns, satyrs, and lovely ladies pursued by handsome lords.

The gateway to romance!

You slip past the carpenters and painters, through the doors to the other side, and are confronted with a blank wall, its heavy insulation spilling from the tears and rents of years of use. Aside from that…

Nothing except, perhaps, a pile of construction trash.

Just then a guard discovers you and escorts you out the gate, warning you never to darken the studio’s doorstep again.

The sound stage set and the stars who act on it, they’re a lot alike—constructed images with nothing much behind them but trash. And me, I’m that guard…except I’m better at my job. If it’d been me, you’d never have gotten onto that stage, never peeked behind that door.

“Pay no attention to that man behind the curtain.”

I’m the guy who keeps you from looking behind the curtain and who, if you do, makes sure you forget what you’ve seen. I try to keep you on that yellow brick road with visions of the Emerald City dancing in your eyes.

The only thing I know about publicity is how to suppress it. Let’s call a spade a spade. I am, like I said, a nursemaid,

though I guess I should say, for the sake of accuracy, I was a nursemaid.

After all, that difference in tense—my trip from “am” to “was”—is really what this story is all about.