This is Dan Bronson, author of Confessions of a Hollywood Nobody, and his new BearManor book, Someone to Watch Over Me.

Check out his interview below. 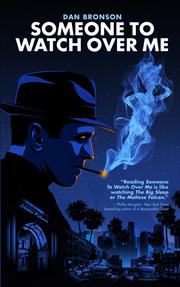 Someone to Watch Over Me (paperback) by Dan Bronson

“If Raymond Chandler had turned a steely eye to the notorious Hollywood casting couch, the result might well be called Someone To Watch Over Me.”—Malcolm Brooks, author of Painted Horses and Cloudmaker

Hollywood, 1947. Jack Shannon, a former actor whose promising career was interrupted by the war and ended by a facial scar sustained in combat, is now a studio publicist. He jokes that the only thing he knows about publicity is how to suppress it, but that, in fact, is his real job. He’s a fixer who babysits the studio’s stars and covers up their bad behavior.

Everything changes for Jack when Savannah Stevens enters his life. A sexpot star in the mold of Jean Harlow and the studio’s biggest box-office draw, she’s a deeply troubled young woman given to emotional breakdowns, unexplained absences from the set, and time-devouring delays occasioned by her paralyzing insecurities and her insistence on dozens of takes.

Jack’s job is to stay with her 24/7, deliver her to the set on time each day, and make sure she completes her current picture, a picture on which the future of the studio depends. All goes well until Savannah disappears, and Jack is assigned the task of finding her…without revealing to anyone, including the police, that she is missing.

“There was Sam Spade, Lew Archer, Travis McGee. Now there is Jack Shannon.”

"A perfect film noir filled with scoundrels, scandals and skullduggery against the backdrop of the land of make-believe. SOMEONE TO WATCH OVER ME travels the boulevard of broken dreams with wit, vigor and shocking surprises. One of the best reads I've had in a long time."

SOMEONE TO WATCH OVER ME is a hard-boiled mystery set in Hollywood in 1947. A whodunnit. I’m curious. When you started writing it, did you know the ending? Did you know whodunnit?

The short answer is no. I thought I knew, but I was wrong. The characters led me in an unexpected direction. One of the positive consequences of this is that there are few clues to the identity of the villain or to the resolution of the plot. In fact, I’ve yet to encounter a critic or a reader who’s correctly guessed the outcome.


What for you is the appeal of the mystery genre? After all, you have a doctorate in English and American literature. Nearly a decade as a teacher of literary classics. I’d expect someone like you to be trying to write the Great American Novel.

I tried to do exactly that with SOMEONE, and to my surprise and delight, there are critics and readers who think I came close. I love the comparisons to THE MALTESE FALCON, THE BIG SLEEP and other classics of the genre because I think Dashiell Hammett, Raymond Chandler, Ross Macdonald and, more recently, Walter Mosley and James Lee Burke are masters of American lit, great authors who just happen to write mysteries.

I can’t tell you why those towering figures chose to work in the mystery genre, but in my own case, it’s because the genre is, by its very nature, a demonstration of Shakespeare’s profound insight in HAMLET: “one can smile and smile and be a villain.” Things, events, people are rarely what they seem to be. That’s true in life, and it’s certainly true in mysteries.


How did you happen to choose Hollywood as the setting for your story?

That’s easy. I’m obsessed. I spent most of my childhood in front of screens, big and small. As an English professor at a small midwestern college, I taught myself film, and then I created a film program to teach it to my students before moving on to Hollywood as reader, story editor and writer/producer. Everyone’s heard that old maxim, “Write what you know.” Well, after nearly three decades in Tinsel Town, I know it pretty well. Truth be known, I didn’t choose Hollywood. It chose me.

Hollywood has an additional virtue, if you can call it that: it is a beautiful, enticing blossom rooted in the rich, dank soil of moral rot. A glamorous mask for corruption and exploitation. In short, the perfect setting for noir fiction.

For me, post-war Hollywood is the most fascinating Hollywood of all. The studios were at the peak of their power, and yet cracks in the foundation of that power were already forming. There were the Paramount consent decrees, which forced the studios to divest themselves of their distribution systems. There was the breakdown of the star system. The challenge of television. The blacklist. It was a time of enormous conflict and change, and conflict and change are the heart and soul of drama.


Did you have any other reasons for giving your story a period rather than a contemporary setting?

Aside from the fact that today’s impersonal, market-driven, corporate Hollywood bores me beyond measure? Sure. I had some very good reasons. I was writing a mystery, a task I find much easier in a world without omnipresent cameras, cell phones and DNA evidence.


But doesn’t that choice make it harder for your story to connect to today’s readers? The younger generation seems to have little sense of the past. Little interest in the past. Their focus is on the moment. The Now.

I’m not sure that’s true of readers, but even if it were, I think they’ll find a lot of contemporary relevance in this remembrance of things past. After all, the plot turns upon the casting couch. The story may take place in 1947 Hollywood, but it can’t help but call up Bill Cosby, Harvey Weinstein, Stormy Daniels, #MeToo, and so many, many others.


It also calls up real-life figures from the past. For example, you can’t really look at Savannah Stevens without thinking of Marilyn Monroe. Is Savannah Marilyn?

For me, she’s Savannah. Oh, she recalls Marilyn in some ways. There’s also a bit of Jean Harlow in her, and she shares a lot of her background with the Black Dahlia. But I like to think she’s very much her own person. So much so that I fell in love with her. And I’m not alone. When Jack Daniel, the talented voice actor who did the audiobook of SOMEONE finished the book, he wrote me a note in which he said, “I fell in love with Savannah, but I want to marry Eva Wilde.” I’m hoping that my other readers will feel the same way.


Are any of the other characters based on real-life figures?

Many of them are composites. For example, Abe Adler is two cups of Louis B. Mayer, half a cup of Harry Cohn and a tablespoon or two of Darryl Zanuck mixed well and seasoned with bits and pieces of the other moguls of the day. Though I made up her personality, my Hollywood madam is based upon the woman who ran the top house in town. The Sewing Circle—the lesbian and bi-sexual group of sex stars so hot they were cold—is real, but the individual members in my novel are completely the products of my imagination.

You know, I just had an idea for a promotion. We could offer a free copy of the book to the first person who correctly identifies the real-life counterpart of Brian Murphy.


We’ll give it some thought. In the meantime, I’m curious about your working method.

When I was writing screenplays, I’d do heavy research, both on site and in libraries. Then I’d do character sketches and I’d prepare a detailed outline. Once I had all that material in hand, I’d give my left brain a rest, and I’d retire to the boat we kept at Channel Islands Harbor, where I turned everything over to my right brain. I’d walk the beach, using the white noise of the waves turning over to isolate myself from the real world until I found my way into the world of my story, and my characters began to speak to me. I’d speak their dialogue into a small tape recorder and then, when I got back to the boat, I’d transcribe everything, revising as I did it.

The process with SOMEONE was different. Oh, I did massive research. But I skipped the character sketches and the outline, so that when I began to write, I had only the vaguest idea of where the story was going to go. I just let the characters take me by the hand and lead me there. As I said earlier, I think that’s the reason most people have a hard time guessing the ending in advance.


One last question. What do you find most appealing about the writing process?

Getting to know the characters and their world. Writers, for the most part, lead a lonely life, spending days, weeks, months and even years sitting alone in a room. But that room is full of life. The characters become so real that it hurts when you finally have to leave them, knowing they will never again be as real, immediate and meaningful to you. I wept when I finished my first studio-commissioned screenplay because I knew how desperately I was going to miss those characters. It’s a scene I’ve played out repeatedly over the years. I hope, of course, that my readers are going to feel the same way, and if they do, I can offer them this consolation: I’m already at work on the second in what I hope will be a series of Jack Shannon mysteries.